We bless God for another Monday as this: the last Monday of July, 2018. The time for us to work and see God’s blessings manifested through the work of our hands. (Deuteronomy 28:12)

#BGIM- WE WILL BOUNCE BACK

The greatest story I will ever hear in this time of Midland-Policeman-Beating-Woman period is when the people of Midland Savings and Loans Ltd tell themselves we will bounce back. There has been much public backlash on the company with some even going to the extreme of calling for the closure of all branches of the company nationwide for that unfortunate incident.

It’s hard for companies to build a reputation, much less to get customers to patronise their goods and services. So for one bad incident to tarnish their image and spoil all the gains they have chalked over time, it’s definitely going to be a difficult period for Midland now. Customers wanting to withdraw their money and new, prospective customers shying away because of that incident.

Hmmmmm but I want to assure Midland and any company that has suffered such a fate that THERE IS HOPE. They surely can bounce back. Let me ask a question?

Who is the first and only coach to have won the UEFA Champions League 3 times in a row (including the first ever BACK-to-BACK)?

I hope you are saying Zinedine Zidane? Do you know of Zidane’s last contribution as a player?

But a dozen years afterwards, he has that enviable ‘unbreakable’ Back-3-Back record to his name.

We all can bounce back. Zizou is not the only to have ever bounced back.

‘Baby Jet’ Asamoah Gyan of the Ghana Black Stars fame also bounced back from the Public Outcry against him for his wastefulness of chances as a striker when Ghana hosted the 2008 AFCON. He’s now Africa’s alltime top goalscorer at the World Cup and his country’s leading goalscorer with 51 goals.

I know by now, you have more examples coming to mind.

We can take inspiration from these men and women to BOUNCE BACK Whenever Necessary.

http://www.facebook.com/write4sharing
_But Remember Everyone Can Bounce Back including Midland and YOURSELF. 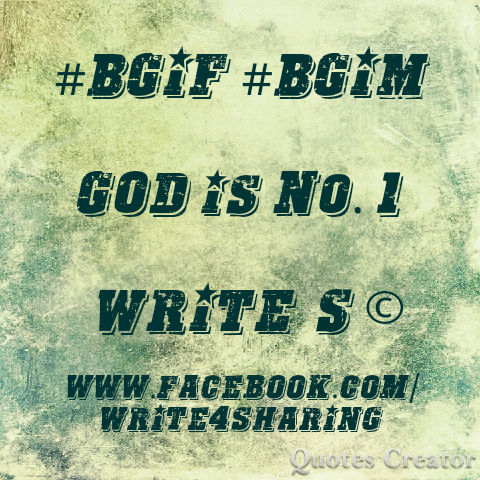 Another Friday presents itself. And we continue from where we left off in our Important Series. After, Rest is Important & Family is Important, we land on the ultimate today.

God is No. 1. He is not just important; He is the ultimate in terms of Importance.

Deuteronomy 8:18
“You shall remember the LORD your God, for it is he who gives you power to get wealth, that he may confirm his covenant that he swore to your fathers, as it is this day.”

Proverbs 10:22
“The blessing of the LORD makes rich, and he adds no sorrow with it. ”

All power belongs to the Lord. The power to make your plans to succeed. He also has the power to THWART your plans so that nothing you do will succeed. Then at the end, you would be chasing after the wind like King Solomon said in the book of Ecclesiastics.

Having observed and listened to the interviews of many successful and accomplished men and women in their various fields of work, i realised that these ones just like us, have a more BALANCED approach to life where they don’t ignore the God Factor.

They all have a conscious presence and acknowledgement of God in their life aside their ever-diligent work output.

Proverbs 16:3 reads
” Commit your work to the LORD, and your plans will be established.”

Proverbs 3:5-6 reads
“v5.  Trust in the LORD with all your heart, and do not lean on your own understanding.
v6. In all your ways acknowledge him, and he will make straight your paths.”

It’s because Daniel made God No. 1 in his life. He gave God the preeminence in his life by his daily unabated prayers to God.

NB:
#BGIM encourages EXCELLENCE always cos there is no substitute for Excellent Work.

The CHARACTER of CHRIST is the FRUIT of the Spirit

But the FRUIT of the Spirit is love, joy, peace, forbearance, kindness, goodness, faithfulness, gentleness and self-control. Against such things there is no law. (Galatians 5:22-23, NIV)

As for the Fruit of the Spirit enlisted Above, I am sure most of us can Rattle it off head and better still explain what EACH of the Nine Divisions/Parts mean and how to DETECT it even as well. But the question I ask on this Sunday morning as most of us would be heading to church is,

Do We BEAR the FRUIT of the SPIRIT at all?

We FORGET that the early disciples bore certain PECULIAR Fruits for which they were TAGGED as CHRISTIANS, meaning Christ-LIKE. Because their lives in totality resembled that of our Lord and Saviour, Jesus Christ, hence they were NAMED Christians. So the next question I ask we, the Christians of Today, I mean ALL of us from Pastors along with all other Ministers to MEMBERS is

Are the lives we live and portray to the world worthy of we still being called Christians?

Or like the Judicial Staff implicated in the Anas Exposé in Ghana, are we supposed to be taken out of our OFFICE as a CHRISTIANS? Which implies, we shouldn’t be called a Christian again?

ANSWER for yourself.
And also ASK your fellow church MEMBER when you get to church today?

I hope this story would inspire you to hold on faithfully  to your Tag as a Christian or most importantly reclaim that Tag forever.

At the just ended Reinhard Bonnke Crusade 2015 at Ashaiman and Tema, Ghana, the following day after the Final Day of the Crusade, when Dismantling & Cleaning works began, more hands were needed to accomplish the task. Fortunately or unfortunately for one gentleman who came to work wholeheartedly, for which everyone on site could attest to, his name wasn’t written down  on the Official List of workers for that day, meaning if anything was supposed to be given to those working on Site that day, he would be excluded. Thanks be to God, one other gentleman who due to his work during the Crusade had an Official Tag (for before, during and after the Crusade) realising the Situation decided that he would hand over his TAG to him, so that he would go home for that day and respond to other assignments whilst the former takes over his TAG so that he can receive anything due him for the good work done since by that time he had worked over 3 hours already. Remember the Good Book  says in 1 Timothy 5:18 that “the Worker is DUE his Wages”.

As soon as he did that and informed the fellow workers of that decision in order not to bring about misunderstanding in his absence,…

Surprisingly, all the workers started telling him that INDEED, you are a TRUE ‘OSOFO’ (Pastor).

WOOOWWW!!!
He hadn’t told them he was an ‘OSOFO’ but now everybody was attesting to his authenticity as a True Man of God. (Actually, he is a DEACON in his church which is 4 Ranks Away from the PASTOR in his church, if I am allowed to put it that way).

I know somebody would say, “Oh, he wanted to go home already” but I would also tell you that most people would have still gone home with their Tags and still demanded their ‘DUE’.

Ask yourself, HAVE I DONE SOMETHING for someone to expose my Christian Tag without me telling them First?
If YES, then I think we need to keep on showing that kind of attitude or behaviour?

If NO, then we need to put aside that attitude/ behaviour/ character and the like just as Hebrews 12:1-2 admosinshes us.

Remember, the CHARACTER of Christ is the FRUIT  of the Spirit.